TeleGeography’s Submarine Cable Map has been updated for 2015. The latest edition depicts 299 cable systems that are currently active, under construction, or expected to be fully-funded by the end of 2015. 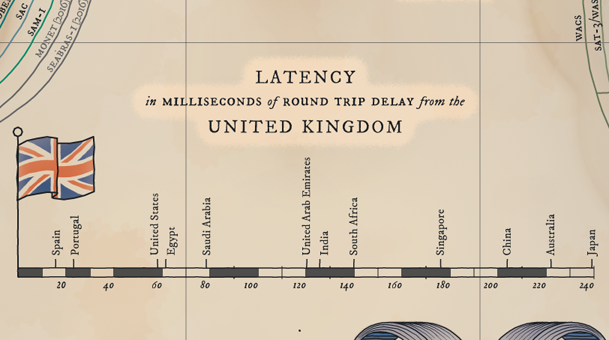 The map provides latency from the United States, United Kingdom, and Hong Kong to several other countries, presented in milliseconds of round trip delay. 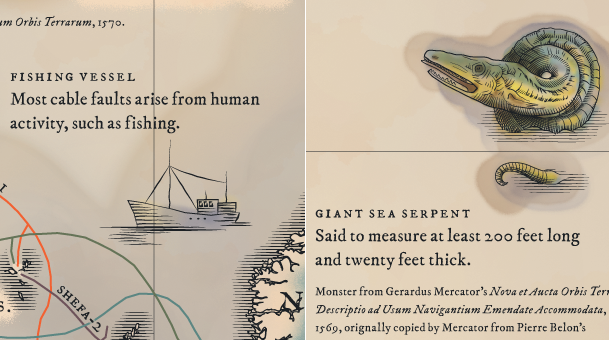 The map is adorned with images of common causes of cable faults, including fishing vessels, anchors, and trenches on the ocean floor, as well as cable maintenance vessels responsible for repairs. In homage to vintage maps, it also includes ornate illustrations of mythical sea monsters.

Inset illustrations depict steps in the cable laying process, including the receiving of a submarine cable on shore and the coiling of cable within a ship’s tank.

The map depicts routes of 278 in-service and 21 planned undersea cables. Capital cities for each country are also provided.

“To bring back the lost aesthetic that vanished along with these whimsical details, TeleGeography referenced a variety of resources in the design process. One of the most invaluable was Chet Van Duzer’s Sea Monsters in Medieval and Renaissance Maps book, which provides arguably the most complete history of the evolution of sea monsters and map design from this period. Our final product is a view of the global submarine cable network seen through the lens of a bygone era.” — TeleGeography