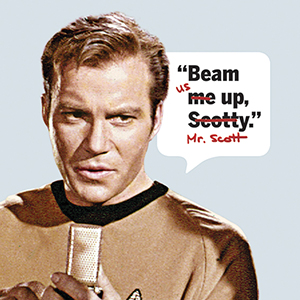 Aaron Hutchins, Great quote! But who really said it?: William Shatner’s character in Star Trek never said, “Beam me up, Scotty.” The closest he came was: “Beam us up, Mr. Scott.” Quotes often get condensed in people’s memories. “Memory may be a terrible librarian, but it’s a great editor,” writes Ralph Keyes in his book The Quote Verifier.

Great quotations seem to find their way to famous names.
(not) Mark Twain

Nigel Rees, Policing Word Abuse: Long ago, I coined the term “Churchillian Drift” to describe the process whereby the actual originator of a quotation is often elbowed to one side and replaced by someone more famous. So to Churchill or Napoleon would be ascribed what, actually, a lesser-known political figure had said. The process occurs in all fields.

Why are people so culpable when it comes to using quotations? In the run-up to the war in Iraq, Barbra Streisand, the well-known Shakespearean scholar, quoted this and said it came from Julius Caesar: “Beware the leader who bangs the drum for war.” Sheer invention. Why did she do it? Ignorance, laziness or what? It’s impossible to know for sure, but she wanted–as we all do–to use the supposed words of someone better than ourselves to lend weight to her argument.